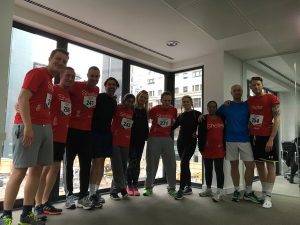 On Tuesday a gutsy group from Coreco, dubbed the Coreco Climbers, took part in Vertical Rush for the charity Shelter. They scaled dizzy heights, running up 932 steps of the London skyscraper, Tower 42 all to raise money for the charity (that’s not to say it didn’t get just a little competitive).

With several of the team tackling the 932 steps in just over 7 minutes it was a sterling effort by all at Coreco and the team have so far raised £850 for the charity with donations still coming in.

Rob Gill, one of our directors and the Coreco Climbers organiser, said “We’re very proud of our 11 Coreco Climbers who made it to the summit of Tower 42, posting some amazing times and supporting a great cause.

The climb was certainly hard work but nowhere near as hard as being homeless. I have always believed that, as advisers helping people buy property in one of the most expensive cities in the world, it’s almost an obligation to give a little bit back to those less fortunate.’’

We couldn’t agree more and we’re all very proud of the Coreco gang, not only for competing but for the money they have raised for Shelter.