This morning I was honoured to present a speech at the first Financial Reporter networking breakfast of 2015.

As no-one threw any food at me whilst I was speaking, (although from the picture it seemed like a train was out to get me), I thought I would share it here. 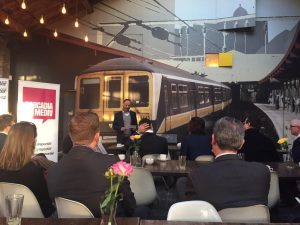 So here we are at the dawn of another bright new year, full of hope, optimism and expectation of another good year.

I must say that after last year and the things we have already seen this year I was tempted to make this incredibly short this morning. With most much better informed and educated economists seemingly er pissing in the wind.. so for me to say what I think 2015 holds in store for everyone could be summed up with a simple “dunno”.

Last year of course saw tumultuous changes in the whole mortgage landscape with the implementation of the Mortgage Market Review, you may have heard a bit about it.

On the whole, as an industry it passed through without too many issues and seems to be bedded in and taking us nicely into a fully advised world and away from income multiples.

Although it seems we are not really escaping from income multiples are we?

With the powers that be paranoid about a “housing bubble” and things all getting out of control again, many lenders have now been forced back into the 4.5 times routine.

Although for those of us who remember when 3.5 times joint was considered a stunning development it does give us some perspective.

Undoubtedly all of this had an effect on the market in the latter half of the year and as is the way when any new legislation is produced, risk teams tend to move to the most cautious setting before easing back slowly over time to a more sensible position.

There are still some issues that are yet to be resolved, specifically around affordability calculations – should school fees, pensions and other “variables” really be taken into account in such draconian ways?

Then there is the whole question of age related policies that many consider just plain ageist – if it’s affordable with pension income, its affordable, so why place a limit on a loan – and the thorny issue of the whole debate around transitional rules.

It should be remembered that the rules around this point were not just set to deal with lenders existing customers but also those looking to remortgage between lenders. As a mortgage prisoner myself I must confess to a personal interest on this one!

The issue for lenders who are currently engaged in an aggressive price war is that low rates will only go so far this year in attracting new business and until they start to look at easing some of the overly restrictive criteria that has come into play since MMR they will struggle to bring in the levels of business they require.

This does not mean lenders should become lax overnight but they need to return to a sensible middle ground that does not discriminate against certain borrowers or cause consumer detriment.

With the FCA conducting a review of lenders policies, the results of this could determine how much lenders feel confident to open up once more. Let’s face it, it is hard to really lay all the blame at the lenders door for this until they feel confident that their lending policies will not be subject to retrospective beatings.

Nevertheless, we will no doubt see some interesting criteria moves, with more lenders coming back into areas such as interest only, albeit mainly in the larger loan arena.

We have already seen some extraordinary rates to kick start the New Year and with competition likely to be fierce to attract new customers, who knows where this will go.

Talking to lenders, it seems that many of them have some pretty stiff targets to hit this year and competitive pressure will be enhanced by some new lenders coming into the intermediary market.

In fact, if I added up all the figures that lenders have mentioned then this year we would see around £275+ billion of lending, which patently ain’t gonna happen.

I think gross mortgage lending up to the £215 billion level seems a lot more palatable, a steady growth on the circa £200 billion in 2014.

As for Bank Base Rate, well this seems to be the most easy prediction and is now unlikely to move this year due to low inflation figures which has bought our own MPC back into agreement.

In fact, given recent cuts in Denmark, Canada and the massive Trillion Euro programme of Quantitative Easing introduced by “Super” Mario Draghi, what price a cut in Bank Base this year?

Either way, it seems these low products are not going anywhere too soon, the only question is how low will they go?

Of course we then have all the big unknowns – no one foresaw the massive slump in oil prices and one minute the Swiss were all tickety-boo and the next all hell breaks loose with their currency. Meanwhile a Greek Exit from the Euro could be back on the cards after their recent election result which could lead to ramifications elsewhere.

However, the big unknown in 2015 is of course the General Election and the uncertainty around this traditionally leads to a slowdown immediately before and potentially a rebound after.

Much does depend on the result.

With confusion around policies such as the Mansion Tax, especially after the stamp duty changes, holding back the prime London market there are a lot of questions to be answered. A long, drawn out process to establish a weak coalition government could lead to further disruption.

But it is all very well pontificating about what things could happen over which we really have no control.

All we can really worry about is our own industry and the good news is that as an intermediary, I must say that it seems we are finally back in a pretty happy place.

Despite what some people may say I’m a pretty jolly chap and I am very optimistic about 2015.

Lenders are recognising the additional amounts of work brokers have to do after MMR and the fact that they need us more than ever from a distribution point of view. As ever, bank branches will not be able to step up to the plate. Hence we are seeing proc fees rise once more to a more sensible level.

Although the year seems to have started with a flurry of activity we could see a flatter first half of the year with a pick-up in the last 6 months, especially with a more decisive election result.

The positives include the fact that we are seeing more first time buyers coming back to the market and this year we should finally see remortgages pick up a bit more. Buy to Let will also continue to be an important sector.

With more brokers becoming involved with seconds and secured loans as well as a growing equity release market, there is business to be done.

There will of course be more challenges to come and yes lending does seem that little bit harder again, with more paperwork and hoops to jump through, but remember where we have come from in the past few years.

There will always be new regulatory challenges, namely from Europe, but we have always got through them and emerged stronger. Remember the initial fears around MMR?

What is more important than ever, is the continued strengthening of the relationship between lenders and intermediaries – we need each other and mutual trust and respect will go a long way to ultimately benefitting the most important people in all of this, the consumer.

To end all I would say is have faith, work hard and the future will take care of itself.